The other day I was trying to install Windows Server 2012 to a test server, but the installation kept failing on a Load driver screen: 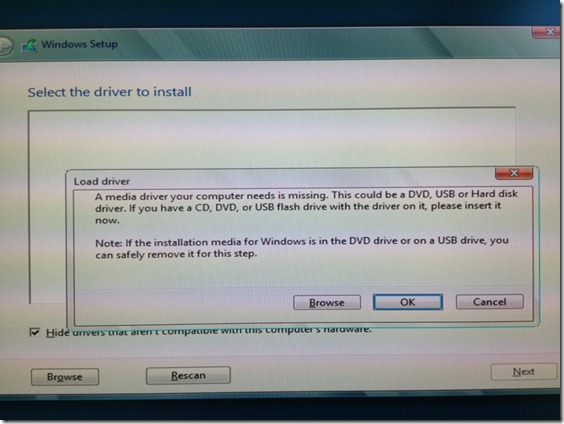 “A media driver your computer needs is missing. This could be a DVD, USB or Hard disk driver.  If you have a CD, DVD, or USB flash drive with the driver on it, please insert it now.  Note: If the installation media for Windows is in the DVD drive or on a USB drive, you can safely remove it for this step.”

Turns out the reason has nothing to do with my hardware configuration but rather some glitch with the DVD+R media to which I had burned the Server 2012 installation media.  So rather than waste time burning additional DVDs I decided to make a bootable USB 3.0 stick instead.

Here are the steps I followed: 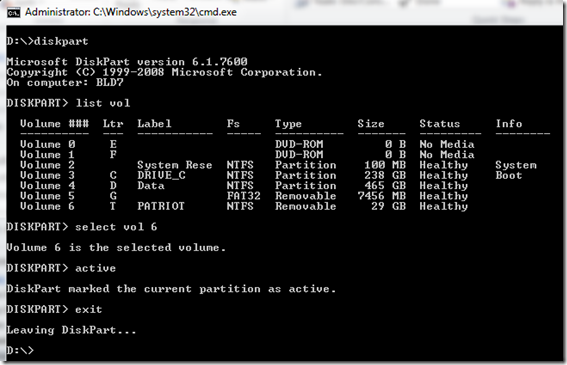 5. In the command window, change to the mounted ISO disk volume, then CD into the Boot folder

7. Copy the entire ISO contents to the root of the USB stick.  (Do not copy the .iso file itself, go to the drive letter assigned to the .iso and use it.)

On the destination computer where you want to install Windows Server 2012 or Windows 8, boot into the BIOS (usually by pressing F2 repeatedly while the computer’ is displaying the initial POST screen), then go to the boot preferences and make sure your USB drive is enabled and in the list before other devices like the HDD.

When all the files are done copying to the device, remove it from the source computer, insert into a USB 3.0 port on the destination computer and reboot.

For me, this worked beautifully.  The OS loaded faster than I’ve ever seen before, and the “Load driver” screen never appeared because apparently all the files were in tact on the USB stick.